The exhibition project "Blue FC" the artist dedicated to his favorite color - the color of silence, freedom and clear sky. The exposition in the halls of the gallery will feature more than thirty paintings created by the author over the past three decades.

“I love the expression of Picasso - paint.
Color expresses nothing but the breath of space.
In reality, color does not exist - color is just an illusion,
which helps us navigate the confused world around us.
Guessing familiar shapes and familiar images is not only fascinating
a fun but fantastic opportunity to change the real world by the power of art.
Space breathes paint, forms swirls, bottomless dips of oceans and
the vast expanses of space, turns dead matter into the movement of life.
Blue and ultramarine are so similar, and so infinitely far from each other.
The color of piercing tenderness, calm and inaudible steps of eternity.
The blue period of Picasso and the blue spaces of the rooms of Matisse.
Silence. Hospital landscape. Expectation. Warm evening.
Portrait of a Bicycle and Great Caucasian Matches.
Persian rugs. Sixth Schnittke Symphony.
Landscape with lemons and a mirror in blue.
Four headless horsemen. Air.
Piano for four hands. D minor.
Martian Chronicles. Dawn
Earth and Heaven
Two figures in the landscape.
Spring in the bay.
Blue FC ".
Alexander Podobed 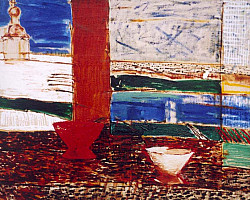 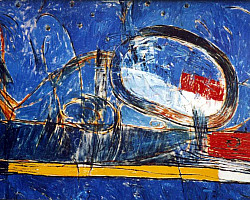 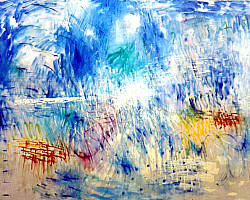 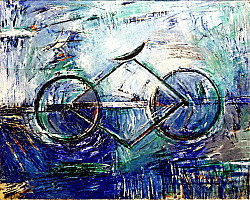 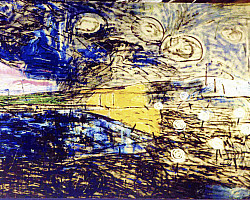 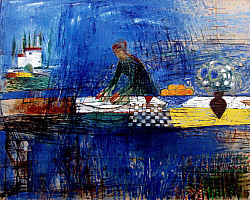 The participant of more than 100 exhibitions, performances, events and festivals at home and abroad, actively collaborates with theaters. In the early 1990s, he was one of the silent leaders of his art group, winner of the All-Union Exhibition “Futurodesign” / Central House of Artists, Moscow, 1989 / and the festival “PHOENIX” / Copenhagen, Denmark, 1996 /, founder of the direction of “psychedelic design”.

He is a consistent representative of the course of post-modernism of the 1990s, with its declarative use of temporary references and quotes. Appealing to the origins of the paintings by Giotto and Brueghel, the paintings of Van Gogh and Malevich or almost contemporary to him Kiefer and Dufy, the artist’s works, nevertheless, are distinguished by a completely recognizable own face and creative style.

Representing art as a dialogue with eternity, the author deliberately shifts the time coordinates, equally using both the secrets of the old masters and the naivety of the children’s drawing. He says: “Art is always more than just a picture, story or image. This is magic and magic. It is the light and music of life. This is an opportunity to speak with heaven without intermediaries. "

The author’s works are in the collection of the State Russian Museum, Moscow Museum of Modern Art, Erart Museum, Museum of Non-Conformist Art, CEH Manege, as well as private collections in the USA, Canada, France, Germany, Italy, Belgium, etc.