January 28, 2020 at 16.00 in the exhibition halls of the Russian Academy of Arts (Moscow, Prechistenka, 21) will open the exhibition of works by artists of the Gusevsky Crystal Plant "Ice and Flame". 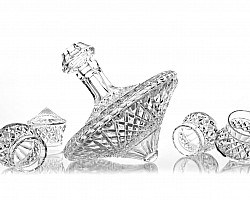 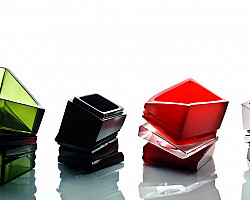 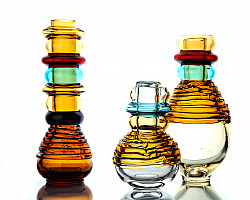 The exposition consisted of about 40 unique works, demonstrating the unique authorial style of the masters, the inexhaustibility of the creative imagination of professionals and the figurative richness of glass.

The history of the Gusevsky Crystal Plant has several centuries. Founded in 1756 by the famous industrialist Akim Maltsev, a widely known and recognized enterprise, the company continues to maintain and develop the best traditions of Russian glass-making. The secrets of talented craftsmen were carefully carried through centuries and multiplied by descendants. The plant produces crystal with a lead content of 24%, which gives the products a certain heaviness, special transparency and radiance. The use of rare earth metal oxides provides a wide variety of shades of color gamut. Original design ideas combined with high quality handmade, using traditional techniques and the possibilities of modern production, a variety of works allow the legendary company to always be at the peak of current artistic trends.

The works of Gusev’s masters have long won the recognition of experts and connoisseurs of arts and crafts around the world. The best works presented at international exhibitions have repeatedly received the highest awards for originality and originality of artistic solutions, uniqueness and virtuosity of performance, a variety of forms, colors and decor. Samples of products from Gus-Khrustalny are in many museum collections, including the State Russian Museum, the State Hermitage Museum, the State Historical Museum, the Tsaritsyno Museum-Reserve, the All-Russian Museum of Decorative, Applied and Folk Art, the Museum of Art Glass of the Elaginoostrovsky Palace Museum of decorative and applied art and interior of the 18th-20th centuries, the Vladimir-Suzdal Museum-Reserve, in the glass museums in Corning (USA) and Osaka (Japan), domestic and foreign galleries and private collections lectures. Among the customers of the enterprise are the Presidential Administration, the State Duma, the Federation Council, Moscow City Hall, Gazprom, Lukoil, Aeroflot, Krasny Oktyabr and many others. The plant was awarded the badge of Honorary Member of the Guild of Suppliers of the Kremlin.

The works of these authors constituted the exposition of the exhibition. It is based on the works of the honored artist of the Russian Federation, an honorary member of the Russian Academy of Arts, an honorary citizen of the city of Gus-Khrustalny, Vladimir Ivanovich Kasatkin, one of those talented artists whose works are called the measure of the aesthetic and technical level of the Gusevsky Crystal Plant. His work is based on rich production experience and deep knowledge of technological processes, the specifics of the material and the subtleties of its processing.

V. I. Kasatkin was born on September 4, 1945 in the city of Gus-Khrustalny, Vladimir Region, in 1971 he graduated from the Leningrad Higher Art and Industrial School named after V.I. Mukhina. At the very beginning of his career, in the late 1960s, Vladimir Kasatkin entered the already established team of professional artists - representatives of the “Gusev School”. The desire to reveal the secrets of the craft, the search and development of various approaches to working with glass helped to find their place in it.

V.I.Kasatkin devoted more than half a century to Gusevsky Crystal Plant. It is difficult to overestimate his contribution to the development of the Gusev school of art glass. He enriched it with original forms, sophistication of color schemes, emotionality, depth of images, high skill. Glass for Kasatkin is not only his favorite material to which he devoted his life, but also the basis for creating his own, special world. The beauty of his glass is a creative reflection of this world, a reflection of his personality.

Dozens of souvenir and mass products designed by him were included in the factory range. Along with design projects, Vladimir Kasatkin creates unique author’s works. Sources of his inspiration are the rich traditions of Russian culture, the history of the country, the classical art of the East, the poetry of nature, the mysteries of the universe, the psychology of human relationships.

In the author’s works, the creative personality of the artist is manifested. They are distinguished by laconicism, constructive clarity and a pronounced idea, strong, confident lines of forms, combined with the sharpness of decorative techniques. Kasatkin is an artist of a wide creative range. He skillfully uses all the well-known techniques, mastering the techniques of goutous shaping, wide-plane and diamond facets, uses original authoring techniques that combine sandblasting and engraving, which creates a rich texture of the work.

The exhibition presents works created by the master in 2017-2019, demonstrating the versatility of his talent. In many of his works, the national theme was expressively resolved. Among them are the well-known compositions “Rus”, “Boots”, the “Tradition” vase, which became the symbol of the Gusevsky Crystal Plant, as well as the composition “Kokoshniki”, which strikes with the finest pattern and filigree carving, the “Sadko” boat with its accuracy shape and color depth.

The originality of the design, mastery of color, texture are distinguished by works on the theme of the Great Patriotic War. With minimal decor, the artist manages to create emotionally strong sculptural compositions. In the work of the “Victory Star”, glass looks alive, preserving the movement of a hot mass filled with color, and the work itself is an embodiment of stability, strength. Despite the severity of coloristic decisions characteristic of his work, the artist manages to embody surprisingly deep images. In the composition “Days of War”, a laconic form, soft smooth lines of silhouettes, color, surface treatment create an image filled with human warmth, as if keeping the touch of hands. The works “Bukhara”, “Archipelago” are emotional and informative, the composition “White color” is distinguished by special musicality of the lines.

At the beginning of the XXI century, when the Gusevsky Crystal Plant was focused on the production of exclusive premium products, Kasatkin developed new collections of products that became not only decorative accents of modern interiors, but also collectibles. Creativity V. Kasatkina, thanks to a variety of imaginative solutions, technical techniques like the glass-making encyclopedia.

Turning to the embodiment of a new concept, Kasatkin is never limited to creating a sketch. As a genuine universal artist, he can think over and create his work from the moment of hot set of glass to the last diamond touch. He works with masters at a red-hot furnace, participates in creating a form - the basis of the work, notes the nuances of cutting in the grinding workshop, manages the sandblasting process

The master’s works entered the treasury of world art. The glass of Vladimir Kasatkin is presented in the collections of major museums, in Russian and foreign private collections. He is the author of prizes from many prestigious sports competitions, contests and festivals, including New Wave and Russian of the Year. The Maltzov Crystal Museum (Gus-Khrustalny, a branch of the State Vladimir-Suzdal Museum-Reserve) has collected more than 60 works by Kasatkin. His work is marked by high professional awards.

The exhibition exposition is supplemented by works by young talented artists. Svetlana Berezina (born 1986), a graduate of the Chelyabinsk art school, the Chelyabinsk art school, and the St. Petersburg State Art and Industry Academy named after Svetlana Berezina, presented works of transparent and colored crystal. Stieglitz. Her thesis, performed at the Dyatkovo Crystal Plant, was launched into serial production and entered the new catalog of products of the enterprise. Since 2014, she is an artist at the Gusevsky Crystal Plant named after Maltsova, a regular participant in exhibitions and symposiums. Author’s works of Svetlana Berezina were awarded high prizes. The works are in the State Vladimir-Suzdal Museum-Reserve, the Museum of Art Glass (St. Petersburg), as well as in private collections of Russian and foreign collectors.

Natalya Lyubimova (born 1988) is a graduate of the Faculty of Industrial Design of Vladimir State Humanitarian University. In 2010, she won the competition of young artists organized by the Gusevsky Crystal Plant and was invited to work. N. Lyubimova - participant of regional and All-Russian exhibitions, scholarship holder of the All-Russian Young Talents-2019 competition, a delegate of the IV International Craft Congress in St. Petersburg, organizer of creative classes in the city children’s club, author of crystal symbols of the All-Russian Family Day, Love and Fidelity, the contest "Miss Russia World", "Barbarian days in the Goose-crystal", special prizes for outstanding athletes. Her compositions “Morocco”, “Flamingo”, “Train of Thought” are demonstrated at the exhibition.

A decorative work, the decoration of which is made in the technique of hand engraving, presents the work of Maxim Morozov (b. 1982) - a graduate of the Art School named after M.A. Balakireva. He is a participant in exhibitions and creative contests. Winner of the third prize of the competition program of the XI Festival of Folk Artists and Artists of Russia “Firebird - 2016”, scholarship holder of the All-Russian exhibition and contest in the field of decorative and applied and folk art “Young talents - 2017”, Laureate of the competition “Young talents - 2018”. In 2019, by order of the governor of the Vladimir region, he was awarded the title "Master of Vladimir Land."

Wine sets “Carousel”, “Quatro”, “Petrogradsky” are demonstrated by Alexander Gryzunov (b. 1969) - a graduate of the art and graphic department of the Vladimir State Pedagogical Institute, developer of more than 170 new products for JSC “Glass Holding” (Gus-Khrustalny). Since 2010 - an artist at the Gusevsky Crystal Plant, has been developing new products and fulfilling special orders of high complexity, a participant in international exhibitions and symposia, winner of the All-Russian contest “Young Talents” (2013, 2015). In 2014, Alexander Gryzunov was awarded the honorary title "Master of Vladimir Land." In 2016, his portrait was placed in the Gallery of Glory of the Vladimir Region.