On January 5, in the Central Manege, collector Felix Komarov will present the exhibition Ernst Unknown. Return to the Manege ”, dedicated to the 90th anniversary of the outstanding sculptor. The exposition includes more than a hundred works by E. Unknown from the collection of the collector.

The exhibition displays more than 20 sculptures of the 1960s-2000s, including monumental works rare for private collections. Among the sculptural works are presented: two types of partially autobiographical work "Orpheus"; one of the many variations of the artist’s favorite image and archetype is the large “Centaur”; the sculpture "New Statue of Liberty", which the sculptor planned to install on the island of Taiwan; one of the master’s most mysterious creations is Bertrand De Born; sculptural portraits and much more. The exhibition has more than 50 paintings and 60 graphic works by the artist: drawings, engraving, lithography. A feature of the art of Ernst Unknown is that he repeatedly returns to the topics of interest to him, creating many variants of the same plot. This can be seen in the presented paintings and graphic works: “Centaur”, “Scream”, “Through the Wall”, “Duel”. An extensive information material has been prepared for the exhibition: rare photographs from the archive of Felix Komarov, the Sverdlovsk Museum of Local Lore and the author’s family; documentaries: Ernst the Unknown Bronze Age, provided by Russia-1 TV Channel, and I Trust My Madness, provided by Ostankino TV Company. A significant amount of information that cannot be represented in the exhibition space of the Manege will be shown to the viewer using multimedia technologies. 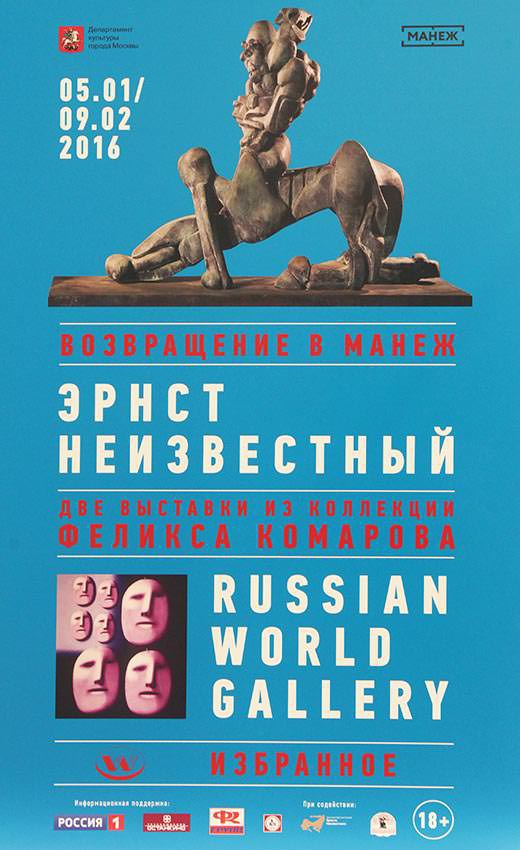 The sculptor, artist and philosopher Ernst Iosifovich Unknown is a unique creative person with a difficult fate. In the USSR, the Unknown received a classical art education and already in his youth was noted at the All-Union competitions of children’s creativity. But the Great Patriotic War interrupted the activities of the sculptor: he left as a volunteer to defend his homeland. The war years influenced the perception of the world by the artist. Returning to creativity after the war, he began to search for a new expressive artistic language. By the end of the 1950s, the Unknown was a laureate of prizes at international festivals, a winner of All-Union competitions. He worked as an illustrator, created monumental sculptures, bas-reliefs in different countries. In 1962, after the sensational exhibition “30 years of MOSH” in the Central Manege, the works of which were harshly criticized by Nikita Khrushchev, the Unknown became one of the most prominent figures in the artistic life of the country. The work of young artists, especially sculptors, caused a sharp rejection by the head of the USSR, which he brought down on Ernst the Unknown, clinging to him in a formidable dispute. This fateful meeting in the Manege was the beginning of a conflict between the sculptor and the authorities, which ended with his forced emigration in 1976. Away from the Motherland, the Unknown continued the search for new artistic means of expression and created many masterpieces.

Ernst Unknown monuments and sculptures have been installed in many cities of the world: in Geneva, Stockholm, New York, where the master lives and works, in the Kennedy center in Washington, in different parts of Russia: in Moscow, Perm, Magadan, Kemerovo, Crimea. Today, two museums of the artist are open in the world - the Ernst Unknown Museum of Art in his homeland in Yekaterinburg and the Tree of Life Museum in Sweden near Stockholm. In addition, his works are in museum collections and significant private collections around the world, including the Vatican collection.

Despite the fact that the sculptor lives far from his homeland, he still remembers and loves her. As he himself admits: “… For me, the homeland is Russia, this is the Urals, where I was born. My home is in the USA, and I am in the Urals with my heart. ” In 2004, the grand opening of Ernst Unknown’s sculpture “The Tree of Life”, a programmatic work of the author, the idea of ​​which he nurtured all his life, took place in Moscow. The sculptor received many proposals to establish the “Tree of Life” abroad, but it was important for him that this work should be installed in Russia. Today, despite his venerable age, the Unknown continues to create. 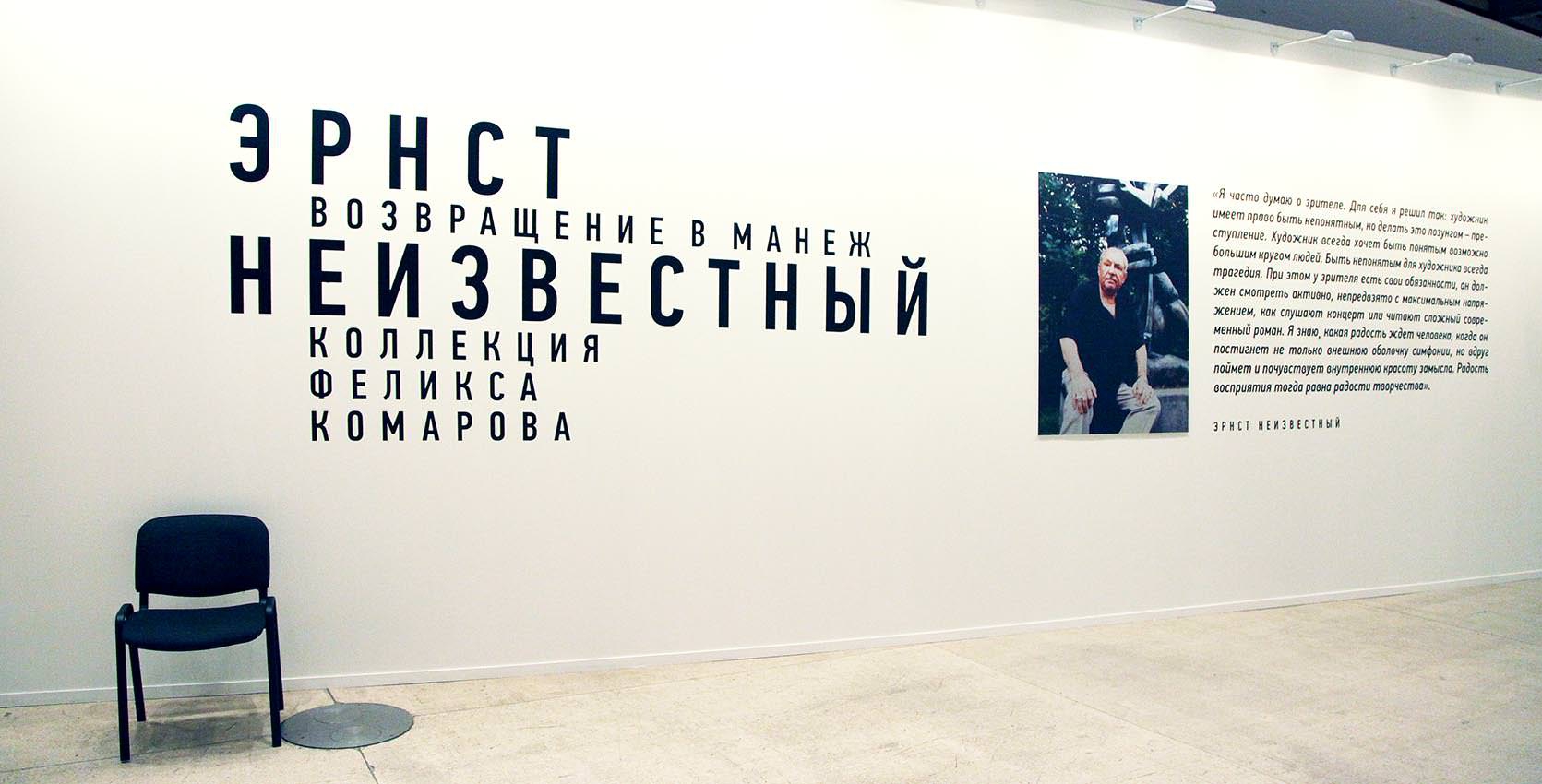 Exhibition “Ernst Unknown. Return to the Manege ”is not just another collector’s project, but his desire to present art to the Russian audience that has been abroad for many years, as well as one of the most striking events dedicated to the artist’s anniversary. This is not only a momentous event in world cultural life, but also the triumph of the highest historical justice.

A catalog has been published for the exhibition with illustrations of all the works presented and introductory articles by collector Felix Komarov and art historians Yu. K. Matofonova and S. V. Popov.

Simultaneously with this project, in the Central Manege, Felix Komarov opens the exhibition “Russian World Gallery”, which will present selected works from his vast collection of contemporary art. The exhibition project is called the eponymous art gallery, created by a collector in the 90s in the United States and giving rise to his collection.

Felix Komarov is active in educational and social activities. He is a member of the Board of Trustees of the Moscow State Conservatory. P. I. Tchaikovsky and the Foundation for the Promotion of the Preservation of the Cultural, Historical, and Spiritual Heritage Rev. Andrei Rublev.