NEW JERSEY. A small oil painting was auctioned for $ 870,000, which is a thousand times the nominal value. There is a suspicion that this work is part of an early series of paintings on the five senses, written by Rembrandt during his student days. The name of the buyer is unknown, suggesting that he was a dealer from the UK. 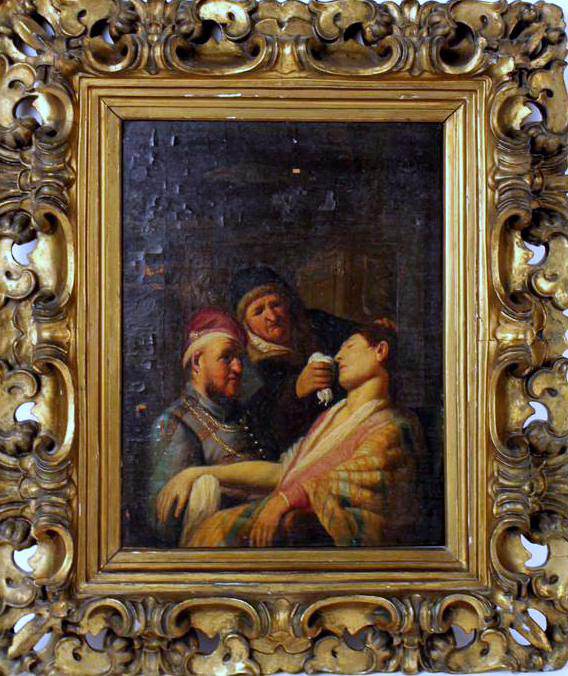 In the catalog, the picture was listed simply as “Triple Portrait with Lady Fainting”. September 22, the painting was sold at Bloomfield auction in New Jersey. Experts at the auction house described it as a panel measuring 12, 5 by 10 inches, a continental school, of the 19th century. Potential buyers were informed that the lot has some paint damage and cracks in the wood base. The picture shows a young woman in a swoon, an old lady trying to bring her to her senses with a scarf (presumably with snuff), and a man, possibly the husband of a young woman.

Experts suggest that this is a picture of “Smell” (Smell), painted by a young Rembrandt allegedly in 1625. It is believed that the series “Five Senses” is the very first work of the old master, made by him as a student in the studio of the Dutch artist Peter Lastman (Pieter Lastman). Three more paintings from this series are known. “Operation” (The Operation, tactile sensations) and “Three Singers” (rumor) are owned by New York collector Tom Kaplan, and “The Spectacle Seller, vision” is in the Lakenhal Museum ( Museum de Lakenhal) in Leiden, the Netherlands.