How to steal Van Gogh?

AMSTERDAM, “Some people are born as teachers, some as footballers. I am a born robber. ” So says Octave Durham, who stole two priceless paintings by Vincent van Gogh on the evening of December 7, 2002. 14 years after he and his accomplice climbed onto the roof of the Van Gogh Museum in Amsterdam, smashed the window with a sledgehammer and removed the canvases from the wall, Durham finally admitted his involvement in one of the most famous post-war art crimes period. The former thief starred in a 45-minute documentary, which was shown on Dutch television on March 21, the same day that the canvases themselves returned to the museum. 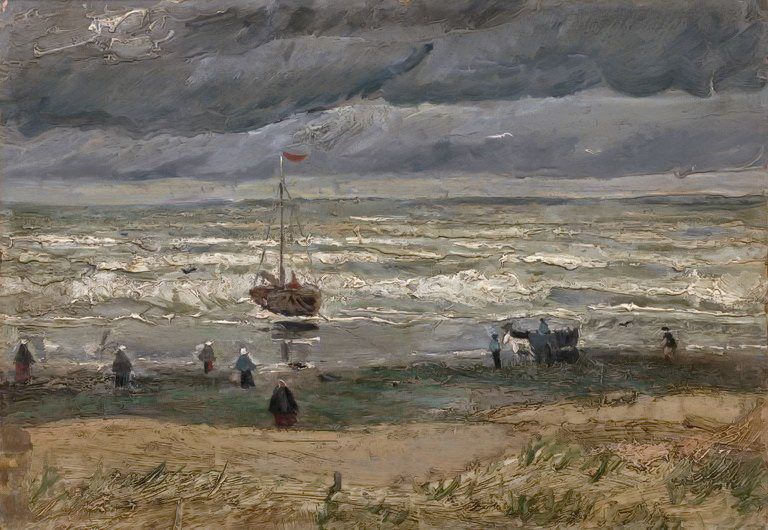 This confession will not have legal consequences for Octave Durham, convicted in 2004 and serving a little more than 25 months in prison, but it sheds light not only on the difficult journey of famous paintings and their salvation, but on the whole system of theft of art.

“The theft took about 3 minutes 40 seconds,” says Durham. “When it was all over, the police arrived at the museum. I drove past them in my car, removing my ski mask and lowering the glass. I drove through and looked at them; I heard them talking on my police wave scanner. They did not know that it was me. ”

The returned works are priceless; they never hit the market. “Seaview in Scheveningen” (1882) is one of Van Gogh’s two seascapes painted by him in the Netherlands, and “Exit from the Protestant Church in Nuenen” (1882-84), depicting a church where the artist’s father served as pastor, donated by Van Gogh to his mother.

However, Durham did not know the historical value of the paintings. He simply took the smallest paintings closest to the broken window, put them in his bag and ran away, descending the rope that he and his accomplice had previously secured. When the thief fell to the ground, he landed unsuccessfully, damaging the paint on the seascape. During the flight, Durham left a black baseball cap at the crime scene. A museum guard called the police, but was not allowed to use force to try to stop the robbers.

“It was a really terrible day,” recalls Nienke Bakker, curator of the Van Gogh Museum, in an interview with The New York Times.

When Durham returned home, he removed frames and glass from the paintings and brushed the paint from the landscape to the toilet. He later threw the frames into the canal. The thief could not openly sell canvases, so he started a rumor about them on the black market and a little later met with Cor van Hout, who was convicted in 1983 for kidnapping beer tycoon Alfred Heineken. Van Hout agreed to buy the paintings, but was killed on the day of the transaction.

Later, Durham and his accomplice Henk Bieslijn contacted the Italian bandit Raffaele Imperiale, who was selling marijuana in Amsterdam at the time. He agreed to buy the paintings in March 2003 for 350,000 euros (approximately 380,000 dollars), which the thieves divided equally. Imperial’s lawyers confirmed that he bought the paintings, although he knew that they were stolen. They explained this by saying that “he is fond of art”, and it was a “good deal”. After the purchase, Imperial sent the paintings to Italy and never showed them to anyone.

“Motorcycles, Mercedes E320, clothes, jewelry for a girlfriend, a trip to New York,” recalls Durham. These purchases helped investigators get a reason for his arrest, but Durham escaped in time, climbing the wall of the building, a skill for which he received the nickname "monkey." His house was searched, but no paintings were found. Durham fled to Spain, where he was arrested in December 2003. The examination confirmed that the DNA from the baseball cap belongs to Durham and that same year he and Beslyin were convicted.

Durham was released in 2006. He still has to pay 350,000 euros in fines. In 2013, Durham came to the museum and, although he still insisted on innocence, offered to help find work. The museum management rejected his offer, as it was decided that he was trying to sell the paintings in this way. In 2015, Durham met with documentary filmmaker Vincent Verweij and told him that he wanted to help him find the paintings in order to clear his debt to the museum and put an end to his criminal life.

“I said frankly that I did not believe him,” Vervey recalls in an interview.

Only after Durham confessed to the theft, the director began work on the film. Already during the filming of Verwey, he learned that on August 29, 2016, Imperial sent a letter to the Prosecutor’s Office of Naples, saying that he had the paintings. At that time, the Italian police already firmly took up his person. Last September, police ransacked Imperiale’s mother’s house, where they found work wrapped in cloth and hidden in a cache inside the wall. Prosecutor Willem Nijkerk emphasized that Octave Durham did not play any role in returning the masterpieces to their homeland.

Nienke Bakker, curator of the Van Gogh Museum in Amsterdam, recalls how they called her at the end of September and asked to urgently go to Naples. She was not given the details, but she immediately guessed everything.

“I immediately realized that the paintings were from our museum,” she said. Bakker was surprised that the work was in relatively good condition. Only in the left corner of the sea landscape were there visible damages. Already in February, the canvases found were exhibited for three weeks at the National Museum of Capodimonte in Naples, and then went to Amsterdam.

Imperial fled the Netherlands to Dubai in 2013 or 2014. For his letter to the Neapolitan prosecutor, he might have hoped for leniency, but in January was sentenced to 20 years in prison. Today, the Italian authorities are seeking his extradition, but the mafia lawyers said that he is unlikely to return to Italy.

“He misses his homeland, but he is a free man in Dubai,” Imperial’s lawyers said in a telephone interview. Durham, who lives in Amsterdam and works as a driver and assistant to his daughter, a successful musician, did not receive a reward for his participation in the search for paintings.

“You will never see documentaries or articles about the art of theft from the point of view of a thief,” Verwey explained his consent to this ethically controversial project. - “They are filmed by experts, museum workers, prosecutors, but never those who actually committed crimes, and I think this is a unique look. That doesn’t mean we admire this guy. ”