Alexander Tokarev is a striking phenomenon of modern domestic and world culture. He is one of the few artists who create works similar in scope to symphonic canvases and epic films. Of all the possible routes, the author is interested in one - the journey of a person in the cosmos of his own consciousness and subconsciousness, the search and discovery of the true "I". In his paintings, figurative storytelling and spiritual space are easily combined. Considering life through the magic filter of poetic transformation, he, like a demiurge, transforms elementary events into stunning dream images, creating his own Universe, a world inside other worlds.

The rare gift of an artist and cinematographer to “squeeze” events in one frame, to stop the narration at the point of highest emotional stress, in a moment that unites “before” and “after”, allows the viewer to “conjecture” the backstory and the epilogue at his own discretion. The author’s play set in this way inevitably turns us into co-creators - accomplices of the Hierophanes. 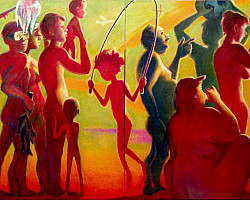 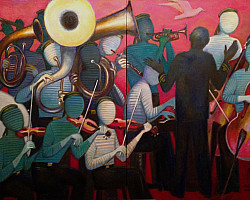 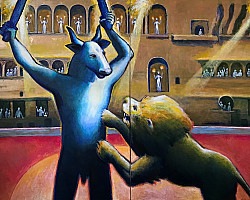 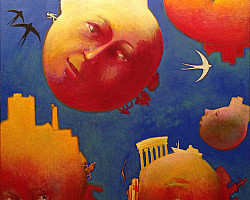 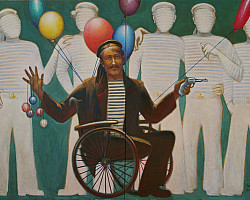 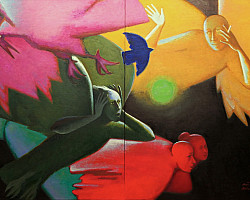 The term "hierophany" is borrowed from one of the most original thinkers and philosophers of the 20th century, Mircea Eliade. It means "something sacred that appears before us", or "the manifestation of the divine, sacred in the mundane and ordinary."

Put together, A. Tokarev’s paintings can be read as a single poetic narrative, spiced with subtle humor and satirical notes. The artist interprets different phenomena of life, filling familiar plots with new content, composes paradoxical metaphors for such universal concepts as Love, Creativity, Childhood, Memory, Fatherland, Time. His characters are as recognizable as they are ghostly, and almost always tragicomic.

Most often, the main heroes of the canvases are those whose consciousness is open to everything new and extraordinary - the Artist and the Child (like the author’s alter ego, "the enchanted wanderer" or just a person in the face of his own destiny). This year’s work, the triptych "Colosseum" - tells about the sacred space of the inner struggle, the symbolic "fall" and "ascension" of the human spirit. Polyptych "Crazy Heads" (2001-2003) develops the theme of "otherness" of the artist and creativity at the intersection of two contexts - conscious and unconscious nature. We meet a metaphysical interpretation of the same symbolic series in the painting "Zero Code" (2016), where objects - celestial bodies - mental bodies - hover in a transcendental space devoid of signs of materiality.

Music is another favorite topic in Tokarev’s work. The image of the "Man-Orchestra" became one of the happy discoveries, allowed to find coloristic and plastic freedom. It found the exact relationship between the abstract and the symbolic, the given and the spontaneous. The virtuoso improvisation of "Man-Orchestra" grew to five hundred canvases and, in the end, became the main creative strategy, transforming into an endless self-portrait. From the silhouettes of musicians, musical instruments, gestures and spherical shapes, there is a feeling of mesmerizing cosmicity. “… I wanted to write a symphony of life and death, where there is birth, and love, and tragedy. A symphony of space, emotionally close to the "Last Judgment" or "Apocalypse". The music they play is just an excuse to depict the Cosmos, ”says the author.

Alexander Vyacheslavovich Tokarev was born in Odessa in a family of artists in 1946. After the Odessa Art School named after I. Grekov (1961-1966) graduated from the All-Union State Institute of Cinematography (VGIK), art and directing departments (1972).

Since 1966 he took part in Moscow, republican and all-Union exhibitions. The first personal exhibition of paintings took place in 1974 at the Union of Artists of the USSR.

In the 1970s he was engaged in easel and monumental painting, collaborated with the magazine "Youth", at the same time he worked in cinema as a screenwriter, artist, director, and songwriter.

From 1988 to 1993 was the chief artist at the Moscow Experimental Musical Theater.

In 2008-2009. Retrospective personal exhibitions of Tokarev were held in two of the largest national museums - the State Tretyakov Gallery in Moscow and the State Russian Museum in St. Petersburg. The artist’s works are presented in museums and private collections in Belgium, Great Britain, India, Italy, Russia, USA, Ukraine, France, Czech Republic, Japan and other countries.